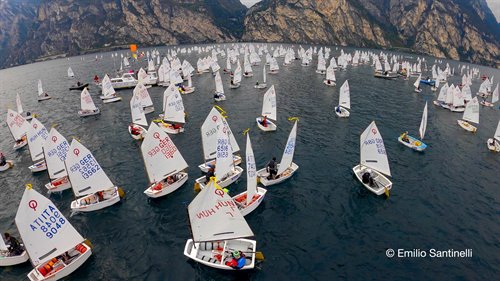 Italians at the top of the ranking among the youngest cadets with Giovanni Bedoni at first place. Lisa Vucetti first Italian in the juniores, sixth; first of the Juniores the german Jost

A positive start to the regattas for the Halloween Cup Optimist, the event that closes the 2019 season on Garda Trentino, organized by Circolo Vela Torbole from Friday 1 to Sunday 3 November. Thanks to the “vinezza", a south-wind that is affected by the bora in the Adriatic, blown in the early morning, it was possible to race in ideal conditions for the very young sailors (10-12 knots), present with a record number of almost 600 at the start. Great work of the Race Committee that had to manage 6 fleets (5 juniores with 473 children at the start; one of the cadetti with 115 competitors) and 15 starts and their arrivals in a single race field.

As announced, in addition to the already difficult management of the race with such high numbers, we wanted to turn to a “greener race”, trying, with the relative risks of the pioneers, the robotic buoys.  The “roboboe”, that in this first day have been managed in the best way from the posaboe-staff  have worked in alternate phases and when the technology did not fully respond to the needs of the moment, the staff has been able to find quick and appropriate solutions to the rules of the race.

The classification, still provisional enough for protests in progress, sees the German Leon Jost at the head in the Juniores category, with 3-1-1 - in the same score with the Hungarian Levente Borda (1-2-2). Third position for the german Krause. First Italian and first female the Trieste-based Lisa Vucetti, vice European Optimist individual champion and European team champion 2019 (SV Barcola Grignano), sixth overall, followed by the ‘rivano’ (from Riva del Garda) already individual European champion and team world champion Alex Demurtas (Fraglia Vela Riva), seventh. Starring in a first partial Leonardo Bonelli (YC Monaco) and Enrico Coslovich (CDVM). Among the youngest Cadetti (8-10 years old) first Giovanni Bedoni (Fraglia Vela Riva), who with a 5-4-2 precedes the other Italian and first female Sofia Bommartini (Fraglia Vela Malcesine), first in regatta 1 and then seventh and fifth. Two points behind the Norwegian Loof (2-2-11). Erik Scheidt, athlet of Circolo Vela Torbole, went upwards: after a 19th, he placed a 5th and a 9th won in the third and last race of the day; he is now fifth in the general classification.

Saturday, second day of racing, start is scheduled at 10:30 a.m.