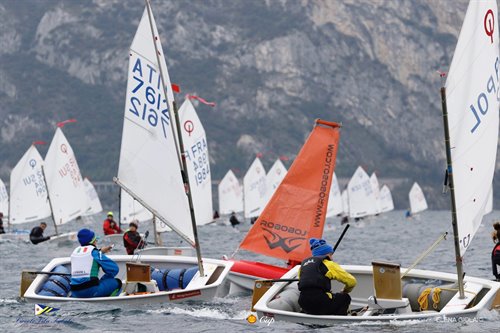 After a new Record Edition, Circolo vela Torbole closes the 2019 Regattas in Garda Trentino and says 'goodbye' until Spring 2020 with new and demanding challenges, first in the list: the eco-sustainable eletric buoys

The 7th Halloween Cup of the Optimist class just ended at Circolo Vela Torbole, an edition in line with the season: after a first day with cloudy weather and wind on 10-12 knots, the second day had “no race today” with the absence of wind, while the third and last day was characterized by rain and light north wind (average of 5 knots), which allowed to close with a fourth race for all categories. Weather conditions of these days are considered normal for the many Nordics present, almost “impossible" for the Italians, who are not used to race under the rain. These conditions don’t have discouraged the IVF Race Committee, which has aligned itself with the choices often found abroad and has brought out the fleets as soon as the north wind has spread, settling at 5 knots on average.

The race, which this year marked a new record with 589 entries, a third of which were Italian (191), offered the last opportunity to race in this long 2019 season on Lake Garda Trentino, confirming the choice of the ‘All Saints’ long weekend, certainly suitable for a regatta dedicated to children (with the families often following). In fact, foreign participation is increasing, considering the 27 nations, including the USA. Apart from the regattas, there were also collateral activities like  krapfen and Nutella Party, pasta party and lottery with many gifts raffled off. But this seventh edition was also important because it was the first regatta in Italy - with these numbers - in which the so-called intelligent/robotic buoys were used. An important event, became possible thanks to the availability of the Swiss company Roboboj, which brought these new models into the race. The technical problems for some buoys were not missing, but for reasons due to voltage fluctuations during the charging of the batteries, which have damaged some electronic parts of the boards. This has never happened before, but it has helped to improve the system even further. The project, carried out by all the clubs of Upper Garda, which has the dual purpose of protecting the lake and facilitating the management of the regatta, has taken a further step forward: now we will have to move on to facts founding new assets for the purchase.

Among robotic buoys, rain, krapften and lotteries there were of course the races: among the youngest cadetti won Giovanni Bedoni (Fraglia Vela Riva), with a point of advantage over Sofia Bommartini (Fraglia Vela Malcesine), first in the women's category. Third place overall for Norwegian Victor Lööf, son of Olympic champion Star Fredrik class (London 2012) as well as bronze medal always Star in Beijing and still bronze-medal in the Finn class in Sydney. With a first in the fourth and last race, Francesco Tesser from Trieste climbed to fourth position; Balaban from Slovenia was fifth. Circolo Vela Torbole rider Erik Scheidt was not able to attack the podium area, due to a disqualification for early start in the last race; the son of the champions Robert and Gintare finished in seventh place overall. Among the females behind the already mentioned Sofia Bommartini the Polish Komorowska; third the British Edwards.

In the juniores category many foreign nations in the top ten with three Germans in the top four in a very short overall ranking, which sees the top six classified in just 2 points. For the resolution of the parity as per the rules victory of the German Honold (2-1-2 with a 25 discarded in race 3) ahead of the Hungarian Levente (1-2-2-8 discarded); third the other German Tim Krause. First Italian, week in general, the Trieste-based Lisa Vucetti (SV Barcola Grignano) already vice-European champion Optimist individual and European team champion 2019, first in the women's category, ahead respectively of the Slovenian Tarin Pecar and the other Italian Rebecca Geiger (CV Muggia).
The Trophy offered by Circolo Vela Torbole goes to the company with the best 4 juniors and has been won with 123 points by the Koper club “JK Jadro Koper", which interrupted the consecutive series of five victories of Fraglia Vela Riva.

After this latest success, the regattas on Garda Trentino will stop until next spring; now it is time for training, programs and new challenges - including ecological ones such as the robotic buoy project - to be carried out with ever greater strength and conviction.