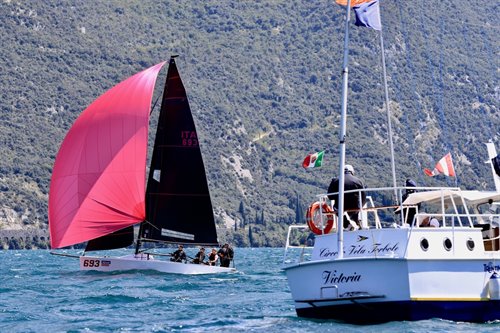 Altea by Andrea Racchelli first ever Three fabulous sunny and windy days at 20 knots inaugurate the season of great regattas on Garda Trentino Official debut of the electric buoys on two racing courses: satisfaction with the stability of the operation considering the challenging conditions with 20 knots of wind.

At the Circolo Vela Torbole ended the Italian Championship Melges 24, which marked the start of the sailing races of the big numbers and awarded the first national title after lockdown. A start to the competitive and sporting season with a double appointment, since the Interzonal Techno 293 Championship, organized in this fabulous weekend at Circolo Surf Torbole, was also held. In fact, there couldn't have been better wind and weather conditions for this opening of the sailing season of the regattas, which brought 22 crews on the Melges 24 (150 committed sailors plus companions) and about sixty young surfers for the Techno 293 with their families and coaches to Alto Garda.Nine races were held for this Italian Melges 24 Championship and the Italian title awarded by FIV Italian Sailing Federation, won by Paolo Brescia (Italian Yacht Club) and his crew composed of Ariberto Strobino, Simon Sibitz, Jas Farneti and Stefano Orlandi on "Melgina", third overall. Andrea Racchelli's Altea in fact - Melges 24 World Champion in 2018 in Canada, first overall and overall winner, had on board the Englishman Nick Asher, who didn't allow him to compete for the national championship; his race management was excellent, especially at the start of the event, while on the last day of racing he controlled his rivals, finishing with a 7-2-8, losing a few points over the Estonian Tonu Toniste (4 points compared to 10 on Saturday). The Estonians won the "Corinthian" non-professional classification; second in the same category Marco Zammarchi (YCI) on Taki 4, who won the Corinthian national title (already World Champion in 2016, in Miami). Third was Sergio Caramel (Portodimare) on Arkanoè by Montura, with a crew of young sailors under 25 from the Northern Adriatic.

A positive weekend also for the Garda Trentino Vela consortium, which made available to the clubs the electric buoys used in both race courses - Melges and Techno 293 - without encountering technical problems.

"These were really the first regattas with numerous crews and rather strong wind conditions, which lasted for all three days with an average daily activity duration of about 4 hours - explained Gianpaolo Montagni, the Consorzio per il Circolo Vela Torbole's representative - With the use of electric buoys adopted in two regattas organized in the same weekend we are now very satisfied with the result, which has allowed us to regularly conclude the events with this new way of conceiving the putting into the water of the race course. A positive signal for this "green" start but also from a more precise and stable technical point of view, which will bring athletes, sailors and tourism on Garda Trentino until late November". Armando Bronzetti, president of the Torbole Surf Club, always talking about the use of electric buoys: "after the tests conducted for two years now, it seems that the goal of electric buoys that are simple to position and functional has been achieved. For the Techno area we organized the buoys arrived the night before and needed a calibration, which on the first day it was not possible to do; for this Saturday the operation was a bit 'alternate. On Sunday instead, after the technical adjustment, everything worked well, finding the satisfaction not only of the racers, but also of the bosaboe themselves and the Race Committee".
Melges 24 again at Circolo Vela Torbole from 7 to 9 August for the debut of the Euro Tour, also valid as ACT 2 of the Italian circuit, while the next race organized by the club chaired by Mauro Versini is scheduled on 25-26 July with the Zonale Laser.