Circolo Vela Torbole and its many midsummer activities 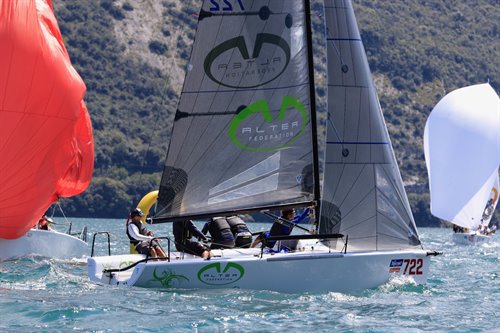 While since the weekend the Laser 4.7 team is engaged to the Europeans in Portugal, at the club the Match race of the partner with final dinner and Team Optimist engaged after the Ora Cup Ora regatta in Arco, at the Lombardi Trophy in Malcesine.

Circolo Vela Torbole is engaged in this summer month, on several fronts: while sailing courses and summer camps for children and teenagers (new this year with a multidisciplinary proposal between sailing, windsurfing, sup) continue with success, the activities and initiatives of the Club chaired by the newly elected Mauro Versini follow one another with enthusiasm. In the weekend guests of the club the Melges 24 monotypes entered for the first stage of the European Championship, second national appointment after the one organized always at the Circolo Vela Torbole at the end of July:8 total competitions raced, in light wind conditions, which only decided the podium on the last day. Final victory gained by Andrea Racchelli's Altea, who after 6 races was in a draw with Marco Zammarchi's Taki 4; only in the final, after a first and a second, Altea was able to confirm its leadership, finishing in first place overall with 3 points ahead of Taki, before the Corinthian, with a crew of non-professionals. The defending Italian Champion Paolo Brescia on Melgina finished third, with a first partial in the eighth and final race.

At the same time as the Melges regattas, the Optimist team coached by Sylvain Notonier took part in the first international regatta organised on Garda Trentino, the Ora Cup Ora: Erik Scheidt's debut in a race with big numbers between the juniors and three CVT athletes in gold fleet, including Erik himself, together with Federico Bonalana and Ginevra Fravezzi. In the meantime, the Lombardi Optimist Trophy at the Fraglia Vela Malcesine has also begun, with the little Optimist athletes still in the water to gain experience and have fun all together. The Laser 4.7 team composed by 5 athletes of the Circolo Vela Torbole is engaged instead from 16 to 21 August at the European Championships in Villamoura, Portugal, with the coach Fabrizio Lazzerini. Among the collateral activities the publication of the new "Diario di Bordo" of the Circolo, an alternative - from the more informative and journalistic cut - to the usual Photographic Book, which this year could not be done because of the problems related to Covid and the consequent delay in the beginning of the season: a little magazine with all the 2020 news of the Circolo, which this year has a new board of directors. The social initiatives were not lacking in this beginning of the mandate, which took concrete form with a day in which the friends of the day centre in via Gazzoletti di Arco - Anffas Trentino Onlus "Liberi di esserci" had the opportunity to go out by boat accompanied by Councillor Gianni Righetti, who made himself available so that the boys could live - after difficult months of loneliness and sacrifice - a carefree day, discovering the magic of the lake and its winds. Finally, on Saturday 15th August there will be the member's dinner, preceded of course by a moment dedicated to sailing: in fact, on Saturday afternoon the "Match race of the member" will take place with the awarding of the title of "Champion of the Club 2020" with crews of maximum 5 members, which will be matched by drawing lots.