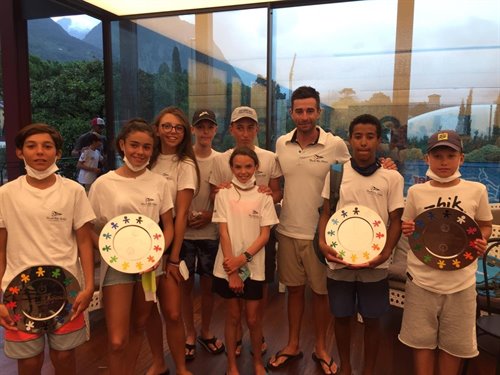 The 38th edition of the Meeting, organized by Fraglia Vela Riva and postponed from April to August due to Covid - has arrived.
While the Circolo Vela Torbole was engaged in the Trofeo Contender Interlaghi, and in the 47th edition of the Marina Preis (Flying Dutchmann) the small champions of the Optimist team took part in 4 days of Meeting - racing against more than 200 boats; 12 total races.
Erik Scheidt who this year for the first time with the Juniores , classified himself 11th.  After Erik Ginevra Fravezzi 17th, Federico Bonalana 21st and Rayene El Haddadi 26th. All four awarded in the top 30!
Well-done also to Lavinia Togni silver fleet, Elena Calbiani, Giovanni Cassisa and Luca Brighenti in the bronze fleet.
Congratulations to our young sailors and an applause also to the coach, Sylvain Notonier.