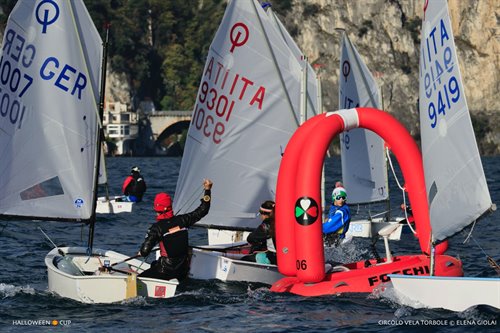 Five races in three beautiful sunny and windy days - so it closes the Regatta-season at Circolo Vela Torbole.

With 5 regattas, the eighth edition of the Optimist "Halloween Cup" regatta, the last event of the season organised by Circolo Vela Torbole, for children from 9 to 15 years of age, ended on Garda Trentino. It was a very complicated edition from an organisational point of view, but the president Mauro Versini wanted to do it at any cost so as not to disappoint the expectations of the many youngsters, coaches, families who had planned this trip, which for many foreigners fell during a holiday period; total participation was more than halved due to the restrictions that many countries had to respect, but the nations present were still about ten with several Swedes, Hungarians, Poles, as well as the "usual" Germans and Austrians. Thanks to the Alpini volunteers who installed a control position at the entrance of the club car park, it was possible to collect the self-certifications of all those who were going to enter the club (athletes, coaches, parents) by measuring the fever every morning; inside the Torbole Sailing Club, distances and the use of masks were always respected, following all the protocols provided by the Italian Sailing Federation, so that they could finally go out into the water and enjoy the regattas in freedom. "Everything went well and the youngsters were able to have fun with beautiful regattas, even in strong winds; on the eve of the event they tried to discourage us in organizing the regatta, but following the necessary precautions we closed the regatta season by offering the children and youngsters present three days of sport lived in the midst of fantastic nature, accompanied by a beautiful sun and wind, which in the morning was certainly not spared" - commented President Versini in his greeting before the award ceremony.

Five races therefore for both junior and cadet categories, with three races held on Saturday and two on Sunday in both strong morning and medium and light morning wind conditions: the classification changed only in the junior category at the top step of the podium; among the juniors, the Irish rider Wright, managed to discard the nineteenth on Saturday and with a first and second on Sunday he grabbed the lead of the final classification, winning the race; unchanged second and third place for the two rival juniors Alex Demurtas and Lorenzo Ghirotti, second and third, who - together with team mates Mosè Bellomi and Mattia Di Lorenzo (11th and 20th) - regained the victory by club, assigned to the club with the best 4 juniors of the general classification. In the women's category victory of Sofia Bommartini (Fraglia Vela Malcesine), who managed to recover thanks to the gap, the disqualification for early start of the first day, reinforced then by the fifth and sixth absolute obtained as best placements. Sofia preceded the Polish Alicja Tutkowska and the Swedish Annie Hinton on the podium respectively. The first three positions of the youngest cadets (9-10 years old) remained unchanged compared to Saturday: with a 3-1 final Artur Brighenti (CN Brenzone) took the victory ahead of Mattia Benamati (Fraglia Vela Malcesine), protagonist of a first and a sixth on Sunday. Third place for Leonardo Grossi (Fraglia Vela Riva). All Italian women's podium won by Irene Faini (Fraglia Vela Malcesine), second Sofia Berteotti (Fraglia Vela Riva) and third Giulia Piacentini (Fraglia Vela Malcesine), sixth, eighth and eleventh in the general classification.
The activities of the Circolo Vela Torbole continue with the training of the Optimist and Laser teams, which constantly carry out activities not only in the water but also in physical preparation.