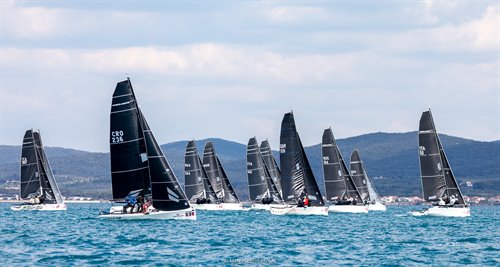 Excellent start to the season for our member Dario Levi

Fremito D'Arja helmed by Dario Levi with Stefano Cherin as tactician, Matteo Ramian as tailer and
tactician, Matteo Ramian as tailer and Fausto Surini as manoeuvre.
second place in the first stage of the Melges 20 circuit of 2021.
circuit of 2021.
After being ranked first in the world ranking list of the class in 2020, Fremito
Fremito D'Arja confirms the good shape and competitiveness of the crew by placing
the crew's good form and competitiveness by taking second place on the podium.
podium.
"It's a pity about the second day - says Dario Levi, owner of Fremito D'Arja - in the first race the crew was not able to compete.
D'Arja - in the first race of the second day we had a break in the spreaders
which allowed us to close the race, but then forced us not to participate in the second race.
forced us not to take part in the second race. After an emergency
on the water, thanks to the remarkable seamanship of the crew
of the crew, we managed to take part in the third race, but at that point the
the chances for first place were unfortunately compromised. Scarlino
Scarlino is a beautiful race course and this year the fleet is returning to an
level of participation of international level crews, which
This year the fleet is returning to a level of participation of international crews that makes the circuit particularly competitive and exciting.
Next stop Cala Galera and then finally on our lake.