Federico Bonalana and his incredible performance at the Optimist Selection 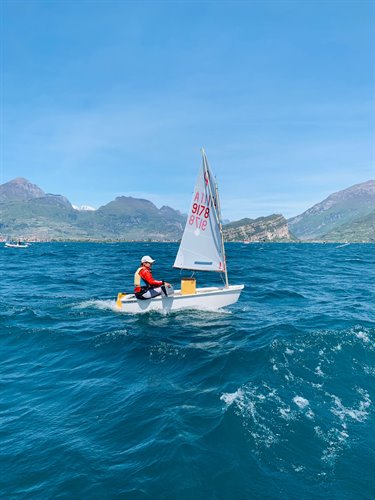 Congratulations to our athlete of the Optimist team Federico Bonalana, who in the 2nd Optimist national selection, which ended on Sunday at our club, literally galloped, recovering positions after the poor performance in the first selection in Scarlino. The strong wind found in Torbole in fact gave him the opportunity to redeem himself and show his skills in his ideal conditions. And so it was, because Federico, who after the first selection in Tuscany occupied only 117th position out of the 140 admitted, recovered position after position: he entered the gold fleet - the first 70 after the first two days and 6 races - he did not lose heart, recovering 90 positions in 4 days, placing two thirds among the strong helmsmen in the race (among the first all European titles). He thus managed to make an extraordinary recovery, which earned him 27th place overall. A result that is certainly not worth a national qualification for the European and World Championships, but which demonstrated Federico's technical qualities in strong wind conditions.