Squadra Optimist between Riva and Campione 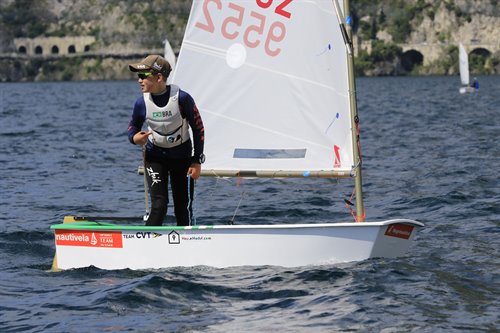 The CVTorbole Optimist Team has been very busy this past week with first the Youth Centenary Regatta in Riva del Garda, and then the first selection for the Italian Optimist Championship and Primavela, held in Campione, always together with coach Sylvain Notonier. Excellent results once again from Erik Scheidt (4-7-9 as best partial), fourteenth overall and from Ginevra Fravezzi, thirtieth overall and fifth female category, with a beautiful fourth overall in race 8. The level of the event, which precedes by a couple of weeks the world class championship scheduled in Riva, was very high with the entire Italian team present, a couple of strong Thais and a total of 22 nations present. On Sunday, while at our club the Lupo Cup in the 420 class came to an end, the zonal selection for cadets (Div.B - Primavela Cup and Cadet Cup) and juniors (Div. A) - Selection for the U16 Italian Championship and President's Cup - took place in Campione. Present for the colours of CVTorbole were Davolio Chia, Fava Dylan, Fravezzi Gionata, Fravezzi Ginevra, Bonalana Federico, Calbiani Elena, Fini Riccardo, Cassisa Giovanni, who took part in three trials in a very light wind. The next selection that will decide who will be able to participate in the Cagliari Championships will take place at Lake Idro on 17-18 July.