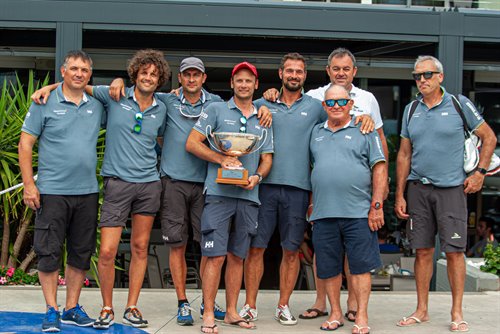 Michele Caldonazzi and his Black Arrow once again led Circolo Vela Torbole to victory in the Transbenaco regatta, in Portese - Torbole round trip race. Great satisfaction for having won in complicated conditions, with very weak wind.

Black Arrow won the Transbenaco 2021 as it did in 2019: the boat, skippered by Michele Caldonazzi, councillor of Circolo Vela Torbole and member of the XIV FIV Zone in charge of training and CONI Trento representative, scored both races on Saturday and Sunday: first from Portese to Torbole and on Sunday morning in the difficult return to Portese. For the victory of the second part of the race, the one that started from Torbole, the decision to break away from the fleet to go before everyone else towards the Veronese coast was decisive. In fact - as can be seen from the GPS tracking recorded during the race - Black Arrow after a good start with a northerly wind from Torbole, like everyone else, struggled to tack between the bonacce just south of Lake Garda, but it was at that point that she played the Joker, daring to take a route that proved to be a winner. On the other hand, the experience of the crew and helmsman Oscar Tonoli evidently made the difference by choosing a route that first allowed them to catch up with their opponents and then to stretch out to a beautiful and well-deserved victory, which was added to the time calculation of the previous day.
Pietro Bovolato's "Eclisse", on the other hand, went completely the other way and broke away from the entire fleet, but its courageous choice was rewarded, finishing second on the finish line just over 7 minutes after Caldonazzi. It was a great race, which tested the patience of all the participants, who had to keep their concentration, looking for the wind.
Michele Caldonazzi's comments: "I am very satisfied with this double victory, first from Portese to Torbole and then in the opposite stretch, since the days were very difficult from the weather point of view, with the wind being precious to say the least. I would like to thank all the crew, who made sure that all the mechanisms worked well: from the tactics to the manoeuvres and everything that makes the difference in a regatta. There were a few tricky moments with wind bubbles that seemed to never end, but we were rewarded for not giving up and the joy of this result is naturally great," concluded the owner of Black Arrow.
Ranking: https://transbenaco.it/wp-content/uploads/2021/07/CLASSIFICA-GENERALE_TEMPO-REALE_ASSOLUTA.pdf