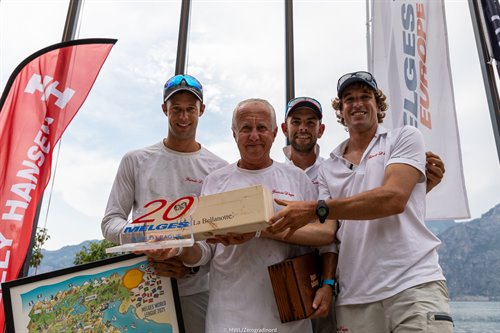 After two second places in Scarlino and Cala Galera, in Malcesine he manages to overtake with two stages to go.

Despite the light wind at Malcesine in the third stage of the Melges 20 European Circuit, the lake of Garda brought good luck to Dario Levi, member of Circolo Vela Torbole, who managed to get on the highest step of the podium after the two seconds he achieved in the first two stages of the season in Scarlino and Cala Galera. And in this 2021 season Levi's results have been growing: after the second place in Scarlino, in Cala Galera he confirmed the silver medal, but with the same score with the first classified, after a battle that was open until the end with the reigning world champion Brontolo of Filippo Pacinotti, who got the better for the best partial final result.
Second places did not completely satisfy Levi, who with his crew made up of Stefano Cherin as tactician, Matteo Ramian as tailer and Fausto Surini as manoeuvres, managed to take victory last weekend at Fraglia Vela Malcesine. With a 2-3-2-1 Fremito D'Arja maintained a high level of performance that allowed them to take the victory, despite the cancellation of two races due to wind shortage in which Dario Levi's boat was leading the fleet. Second place went to Vladimir Prosikhin's Russian team Nikka with Federica Salvà maneuvering and third to the other Russian team Bogatyrs with Igor Rytov.
With this brilliant result and adding up the partial results of the three legs of the Melges 20 European Circuit, Dario Levi is now leading the overall classification: "It's a shame about the wind, which was rather inconstant and allowed us to complete 4 out of the 8 races scheduled. Only on Saturday it was a "Lake Garda" day with a nice Ora stesa and despite an OCS in the first of the three races, we ended the day with a third, a second and a first. Our tactician Stefano Cherin confirmed that he has a great feeling with the boat and the Malcesine race course and the crew sailed perfectly". - commented Levi after the victory in Malcesine. At this point Dario Levi's crew, who have strengthened their control over the season's ranking, will have to make the most of the stages in Sardinia (at the end of August and the end of September in Villasimius and Puntaldia respectively) to defend their leadership and try to contain the attacks of Russian Bogatyrs, one of the main pursuers and second after the first three fractions of the season.
Ranking: https://yachtscoring.com/media_print_3_top3.cfm