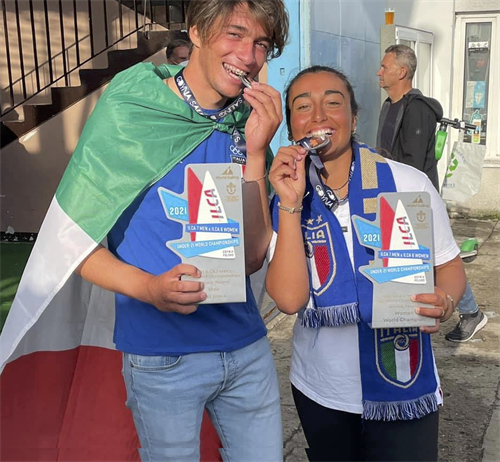 Circolo Vela Torbole and its Ilca team European and world podiums, ready for the youth and absolute tricolours

Circolo Vela Torbole with its Ilca/ex Laser team is ready to face the FIV under 19 Italian Championship in Cagliari, one of the last most important appointments of an exceptional season to say the least. These results have been achieved thanks to the skills of the male and female athletes, who have followed the training sessions with commitment, combined with the skills and charisma of coach Fabrizio Lazzerini, who manages to keep the team focused and active, and the organisational skills of Circolo Vela Torbole, which makes it possible to realise all the team's projects and objectives. Responding to the needs of the coach and the athletes is a commitment that the Circolo tries to respect and the combination of all these elements, professionalism and availability is bringing increasingly prestigious competitive results. The season, which has culminated in the conquest of titles and podiums in recent weeks, has racked up many victories and podiums that we summarise below: from the continuous podiums at the Italia Cup, followed by Alessia Palanti's European Ilca 6 Under 21 bronze and Alessia's victory at the European Under 19. It was then the world wave that brought the bronze medal of Sara Savelli at the Ilca 6 Under 19 World Championship in Arco, the Ilca 4 bronze medal of Gaia Bolzonella in Ireland, the spectacular gold medal of Giorgia della Valle and the equally exceptional silver medal of Matteo Paulon at the Ilca 6 and 7 Under 21 World Championships respectively, without forgetting all the other members of the team who, in rotation, have conquered respectable positions, always remaining in the top 10 in all the events, be they national or European-World Championships. A job that certainly comes from afar and that rewards the commitment of all the parties involved in this sports project, which in this final season is involved in the dispute of the Italian youth and absolute (scheduled on Garda Trentino from 23 to 26 September). In these days in Cagliari there will be Gaia Bolzonella, Carlotta Rizzardi, Rayenne El Haddadi and Peter Stimpfl, once again on the starting line to give their best, knowing that they represent not only themselves, but the whole Circolo Vela Torbole, which invests and will always invest in young people.