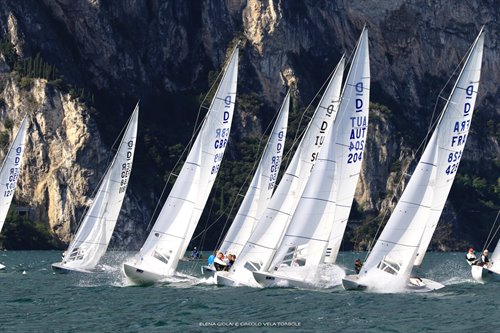 The Dragons shine on Garda Trentino: Wagner Cup and Bertamini Trophy awarded after three beautiful days of sun and wind. At Circolo Vela Torbole elegance and refinement are the protagonists with the Dragons, the Olympic class from 1948 to 1972.

The seventeenth edition of the Wagner Cup/8th Bertamini Trophy - a regatta for the Dragon class - was very fortunate in terms of weather, with three days of warm sunshine and a medium-light wind on the first day, medium-strong on the second, and lighter on the third and final day. The conditions were therefore perfect for all the participants who are keen to take part in this event organised by Circolo Vela Torbole, which once again saw a fleet coming not only from Italy, but above all from Germany, together with Great Britain, Austria, Switzerland, Russia and Hungary. The podium was very close for a regatta that was also valid as the Italian Championship and the unfailing charm of a boat that was an Olympian from 1948 to 1972. The first five positions were absolutely international with four different nationalities. After 8 races, the German crew on GER 62 with Stephan Link at the helm, together with Butzmann and Lipp, came out on top, leaving the British Diederichs-Scott-Jamie 3 points behind. A little further back in third place was the Russian crew of Dmitry Samokhin. The first Italians, seventh overall, paid for a disqualification in the seventh race, which compromised the overall podium: the crew on "Rockandrolla for Emmara", made up of experts and multiple champions in various classes such as Alessandro Solerio, Andrea Rachelli, Vittorio Zaoli and Chiara Magliocchetti from the Sanremo Yacht Club, nevertheless climbed to the top step of the Italian podium. The second Italian crew was Giuseppe Duca with Gustavo Lima and Cesare Bozzetti, and the third was Giuseppe La Scala, Roberto Benedetti and Simone Dondelli on the beautiful Galatea II, a wooden Baglietto built in 1951 and an Olympian in Helsinki in 1952, restored by Aprea and then refitted for racing by La Scala himself.
VIDEO: https://youtu.be/4yz0coeDqkk
Photo gallery: https://circolovelatorbole.smugmug.com/2021-Dragoni-Wagner-CupTrofeo-Bertamini