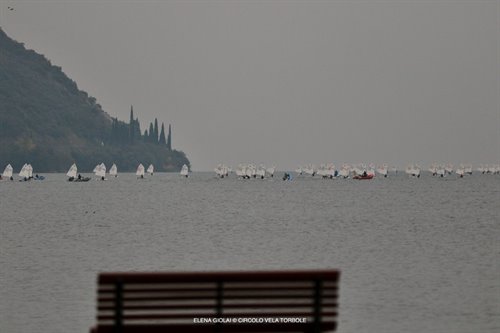 Artur Brighenti more and more successful: first among the cadets; US double in the juniors, while Victoria Demurtas wins among the girls. The bad weather does not stop the 600 baby helmsmen, who on the last day went out shortly after 7 am!

Once again the very young Optimist sailors surprised: on the last day of racing at the 9th Halloween Cup, an event organised by Circolo Vela Torbole with almost 600 participants, the baby helmsmen left at 7:10 a.m. to get to the race course with the first start scheduled for 8:00 a.m. Fortunately the rain was late in arriving, while the north wind blew from early morning. Certainly the temperature and weather were autumnal, but for the young helmsmen it was not a problem: as always they were ready on the starting line with great determination. Satisfaction on the part of the organisers of Circolo Vela Torbole for having returned to a participation that reached the 2019 record; great work by the Race Committee and Jury, also in the cold and rain just for the passion for sailing.
So the gold fleet with the best 110 in the overall junior ranking took off first, followed by the cadets, the 9 and 10 year olds, also well harnessed to deal with the wind and rain forecast for this Monday 1st November. The gold fleet managed to get in two more races to finish with 6 races in all; cadets and the remaining junior fleets finished with 4 and 5 races respectively.
Cadets
Yet another race won by Artur Brighenti (4-1-1-5, CN Brenzone), first with 4 points ahead of the other Italian Jesper Karlsen (CV Toscolano Maderno), first in the last race. Andrea Demurtas (3-2-3-3, Fraglia Vela Riva) was on the third step of the podium. In the women's category first and eighth overall was Malea Hochbaum from Germany, second was Antonina Dziekanska from Poland and third was Irene Faini from Italy (Fraglia Vela Malcesine).
Juniores
US double with USA 111 James Pine deservedly first with three firsts, two seconds and a third, giving him a 20 point lead over his compatriot Wylder Smith, second despite being disqualified at the last start. Third with 16 points behind the Czech Jiri Tomes in great recovery in the last day with a seventh and a first. Italian victory in the women's category, with Victoria Demurtas (Fraglia Vela Riva), who is following in the footsteps of her brother Alex (European and World Optimist team champion); for her an eleventh overall with a first in race 4, as well as Aurora Ambroz (CV Muggia), second female with a first in the qualifying battery. Third place for Poland's Alicja Tutkowska.
The Halloween Cup Trophy, awarded to the first club with the best 4 juniors was once again won by Fraglia Vela Riva thanks to the performances of Victoria Demurtas (11th), Giovanni Bedoni (14th), Leonardo Grossi (17th) and Mattia Di Lorenzo (22nd).