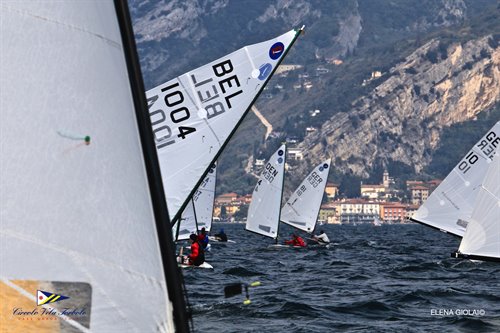 Record entries for 22nd Torbole Europa Meeting: after two years of forced stop due to pandemic, 170 participants from 10 countries

Finally the Meeting of the Europa Class, the former women's Olympic Class from 1992 to 2004 (Barcelona, Atlanta, Sydney and Athens) and currently a single class still very popular in some European countries such as Spain, France, Belgium, Sweden, Norway and Denmark, is back on Garda Trentino and at Circolo Vela Torbole. The event had not been held since 2019 due to the pandemic, but the numbers for the 2022 edition are extraordinary, since they exceed those of the last edition, the twenty-first: there are currently around 170 helmsmen registered, compared to 129 in 2019, so it is already a success to have such a large number of participants.
The event will start on Saturday 9 and will end after 9 possible races on Monday 11 April (3 races per day). The weather conditions on Garda Trentino should be more clement than last weekend, with mild temperatures around 20 degrees and, we hope, with enough wind to entertain the participants, who in the past editions have shown to fight for the podium until the last board. Ten nations are taking part. Circolo Vela Torbole is ready to welcome the Europa class fleet in the best possible way, as is the organization on the water managed by “Garda TrentinoVela Consorzio” for the electric buoys. And for the participants, who have not been to Garda Trentino for two years, this will be the first time they will be racing with the race course positioned with robotic and electric buoys with GPS anchorage. The waters of Garda Trentino are much appreciated by the Europa Class Union, since in recent years they have chosen North Lake Garda for the holding of a European Youth and Master Championship (2018) and a World Championship, in 2016. It will therefore be a party for everyone to return to racing between “ora” (local south wind) and “pelèr” (local north wind).
event web page: https://www.racingrulesofsailing.org/documents/3060/event