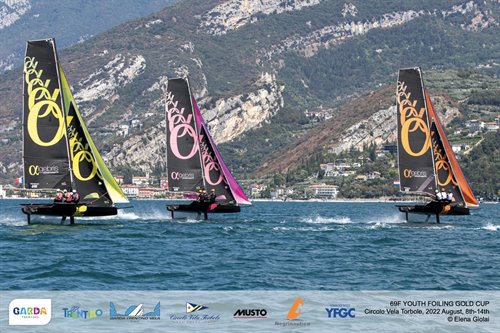 "The best day of sailing in the history of the 69F," said Garda Director Dede De Luca after the final day of finals.

Perfect finals at the 69F Youth Foiling Gold Cup concluded in Torbole
"The best day of sailing in the history of the 69F," said Garda Director Dede De Luca after the final day of finals.

The 12 teams competing at the 69F Youth Foiling Gold Cup that ended on Sunday in Torbole, on Garda Trentino, found truly fantastic conditions during the last two days of the finals, in which the six finalist teams, namely DutchSail Janssen de Jong Mixed, Team France, Clean Sailors Youth Racing team, Team Black Salmon Argentina, the Swiss of CER-Ville de Genéve and Okalys Youth Project, finished in that order in the final overall ranking. For the Upper Lake Garda the confirmation of a perfect race course for the new foil boats, which also love windy conditions, but better if with flat water, which was possible to find on the last two days of the finals, when racing in the morning with a northerly wind. The teams that bowed out in the preliminaries were Groupe Atlantic (France), Katana Sailing Team (Switzerland), Team ID Voile (France), RNZYS 69F Racing (New Zealand), and San Franciso Flyer (USA), who in turn finished in order in the silver fleet races. At the Circolo Vela Torbole, organiser of the event in collaboration with the 69F class, great satisfaction for having offered all the young teams present and the 69F staff the necessary services to prepare themselves in the best possible way for the races ashore, as well as varied wind conditions for the entire duration of the event, thanks to a perfect week, so much so that the Race Director" Dede De Luca commented on the closing of the event: "The final day of this 'act4' held in Torbole was undoubtedly the best in the history of the 69F," a statement that confirms the guarantee of top regattas on Garda Trentino. The finale was also exciting from a sporting point of view, since after the first day of the finals on Saturday, Team Black Salmon Argentina had taken the lead, but on the last day they had to give way to the strong Dutch of "DutchSail Janssen de Jong Mixed", who won the final victory. Third place on the Clean podium went to Sailors Youth Racing Team. On the final day, the tactical choices made by each crew were fundamental, as were the manoeuvres of the fast Persico 69F, which are being handled more and more safely in foil gybe, but also making progress in the ever closer foil tack.