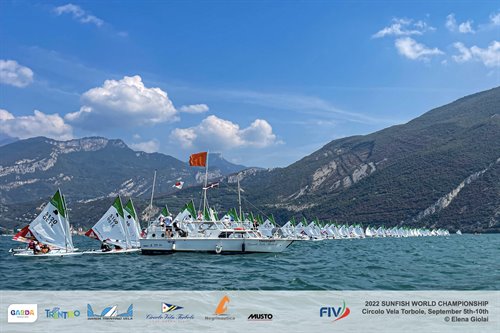 The Sunfish World Championship started on Lake Garda Trentino, Italy: spectacular setting with all the sails with the tricolour, in honour of the host country At Circolo Vela Torbole the most popular boat in the world is colouring the Upper Garda with almost 100 boats at the start; 14 Italians After the first three races, the ranking is very short in the top positions: Peru in the lead with Jean Paul De Trazegnies followed at one point by compatriot Romero

It is a truly remarkable and unusual sight that the 94 boats of the Sunfish class, engaged from 6 to 10 September for the 51st World Championship, are offering both at the Circolo Vela Torbole venue and all over the Upper Lake Garda, a regatta course known the world over for its unfailing wind. The boats in fact, all chartered apart from those of the Italians, are all the same and above all have been provided with new sails customised for the occasion: with the World Championship in Italy, the tricolour has been clearly highlighted. The event, organised by the Circolo Vela Torbole in collaboration with the Italian Sailing Federation, Garda Trentino Vela Consorzio, and the Italian and international Sunfish class, began on Monday with a practice race and opening ceremony, while the official races began on 6 September, with the first three races held in optimal conditions of warm sun and medium wind. The fleet is truly heterogeneous with helmsmen of all ages, from the youngest to the over seventies who still enjoy racing, travelling the world: 12 nations are present, mainly from America and South America with the United States having the largest number of participants. Peru got off to a good start straight away with two of its helmsmen in the top two positions after the first three races: with a 2-10-5 it was Jean Paul De Trazegnies in the lead, followed by his compatriot Caterina Romero, who took a twelfth followed by two thirds. With a fifteenth and two second places, he occupies third position just one point behind Romero and in a tie with the fourth, David Hernandez (Guatemala), flanked by Just van Aanholt (Aruba).
Results after 3 races: https://yachtscoring.com/event_results_cumulative.cfm?eID=14874
Photo gallery: https://circolovelatorbole.smugmug.com/2022-Sunfish-World-Championship
VIDEO: https://youtu.be/SrDIaL9rQNI