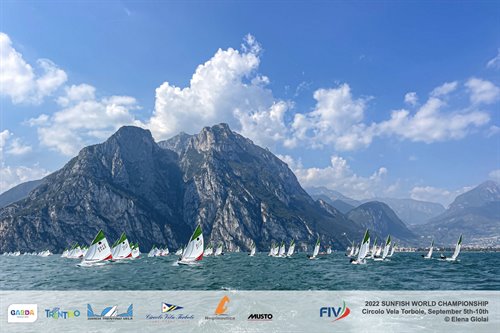 The Sunfish World Championship continues to colour Garda Trentino with its almost 100 tricolour sails. Peru again ahead with Jean Paul De Trazegnies and Caterina Romero, first in the women's category

Cloudy weather did not stop the wind on Lake Garda Trentino for the second day of the Sunfish World Championships, organised at Circolo Vela Torbole and scheduled until Saturday 10 September. Two races were held in a southerly wind of 8-10 knots, but the general classification after five races did not change compared to the first day, although the gaps between one competitor and the next began to become more important: the Peruvian "couple" with Jean Paul De Trazegnies and Caterina Romero, the first woman, still leads. There is now a 9-point gap between the top two in the overall standings: De Trazegnies won the first race of the day, while Romero won the second one, with a gap. At 8 points, the Guatemalan Juan Maegli, third, was regular today with two second places. The first discard of the worst race will come after the sixth race; the second after the twelfth and final race. Italy has so far failed to hold its own against the strong South American and American helmsmen: Antonio Liotta is the first Italian, in 31st position. First in the youth category (under 19) the Ecuadorian Stefano Andre Pendola de La Torre, ninth overall. First master, twelfth overall, the American Mike Ingham, while in 22nd place overall, but first of the grand masters, the Peruvian Alex Zimmermann, first in race 3.
The Sunfish, a Latin-sailed dinghy born in 1954 in the United States and very popular especially in the Americas, is proving to be a boat with good speed in 8 knots of wind and with its very long boom it is certainly original: after so much foil, a sailing method that is now mastering in the latest regattas all over the world, a return to the past with helmsmen of all ages, who experience sailing as fun, pleasure and an opportunity for sports tourism, as well as a competitive event, makes the spectacle offered by these dozens of equal sails, closer to everyone.
Video: https://youtu.be/SrDIaL9rQNI
Classifications: https://yachtscoring.com/event_results_cumulative.cfm?eID=14874
Photo album: https://circolovelatorbole.smugmug.com/2022-Sunfish-World-Championship