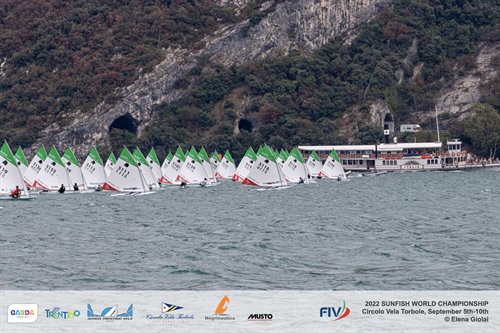 Third long day at the Circolo Vela Torbole for the hundred or so Sunfish competing in the 51st World Championship Class. The early morning thunderstorm, which mainly hit the lower part of Lake Garda even with a whirlwind, slowed down the formation of the afternoon thermal breeze on Garda Trentino, which arrived later than usual, of light intensity and of short duration, as usually happens in the month of September. On the third day of racing, only one regatta could be sailed, but it was enough to apply the discard of the worst race out of the six sailed so far. Despite this, the first three positions did not change thanks to the regularity of the placings of the first three helmsmen: always a Peruvian one-two in the lead with Jean Paul De Trazegnies and Caterina Romero, second overall and first woman at 8 points behind their compatriot undisputed leader (today first and second respectively). Further back is Juan Maegli (Guatemala), third with a 14-point gap. Great comeback instead for the other Peruvian Renzo Sanguineti, who climbed from 21st place to fifth overall, discarding the disqualification of the first race (UFD at the start). Also advancing was the American Mike Ingham, first master and sixth overall. For the Italian colours after the discard there is some position gained for Antonio Liotta, who remains the best Italian, twenty-seventh. Friday will continue with the racing programme with the first possible start at 13:00, giving up the planned rest day to make up for the races not contested, which were scheduled to be three a day.
NEW--Video: https://youtu.be/4NFS4Cy_LKM
Standings after 6 races and one discard: https://yachtscoring.com/event_results_cumulative.cfm?eID=14874