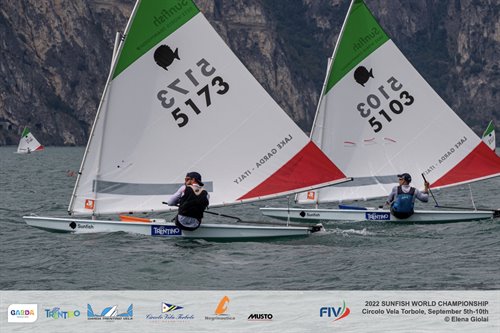 Peru dominates at the Sunfish World Championship: overall, women's and grand masters victory respectively with Jean Paul Trazegnies, Caterina Romero and Alex Zimmermann. USA hat-trick in the masters, while it was Ecuador's Stefano Andre Pensola de la Torre who won among the youth On Garda Trentino ten regattas in five days with winds varying from light to strong

After 10 races held in very varied conditions, first with medium-light southerly winds and then with gusty, stronger northerly winds, especially on the last day, the 51st World Championship of the Sunfish class came to an end. Organised by Circolo Vela Torbole, Garda Trentino Vela Consorzio and Federazione Italiana Vela, the event attracted around one hundred crews, mainly from South America and the United States, together with Italy and Holland. From a technical point of view it was certainly a complete championship for the different wind conditions found, starting from 8 knots up to gusts of 20 in the last two races on Saturday morning. Deserved and overwhelming victory for the Peruvian Jean Paul De Trazegnies, very regular and often the protagonist of great recoveries: he dropped one tenth; for the rest of the championship he always remained in the top 5 with 3 first partials. The northerly wind of the last two days compromised the final overall result of the other Peruvian, Caterina Romero, who was confirmed first of the women, but after four days in which she gravitated to second overall, with the last four races she gave way to Guatemalans David Hernandez and Juan Maegli, who finished second and third overall respectively. Hernandez, who finished 32 points behind winner De Trazegnies, ended the event with a second and a first; compatriot Maegli, eight points behind, with a first and a sixth. Caterina Romero did very well in the medium-light wind, but with the violent gusts from the north she was unable to maintain the pace of the first days: she nevertheless finished in a splendid fourth place, winning in her category; second woman was the American Caroline Young and third Philipine Van Aanholt (CUW), 32nd and 33rd overall. Keeping in the top ten was the winner of the masters category, the American David Mendelblatt, eighth overall, while the first youth, sixteenth overall, was Ecuadorean Stefano Andre Pendola de la Torre. Peruvian victory also came in the grand master cetegory with Alex Zimmermann. The Italian colours did not shine: first Italian and thirty-first overall was Davide Lavafila.
The event was experienced in a nice family atmosphere, as the Sunfish class likes to define itself. Turism, sailing, and sport were once again a winning combination to experience a Sunfish World Championship in an area such as Trentino and Lake Garda, which satisfied the needs of both racers and their companions and families: a formula that allows foreigners to come to Italy and enjoy the natural beauty and more.